The following two paragraphs are from the July 1997 issue of En Passant, the journal of the Pittsburgh Chess Club.

"Being wealthy and eccentric, Rice used a portion of his wealth to promote "his" gambit. He paid top players to write analysis about "his" gambit, and paid for the publication of several books on it, some of which are in the Club library. The first such book appeared in 1898. Indeed he printed so many copies of these books that I was able to purchase one when I began tournament play sixty-five years after it was printed. He also sponsored "Rice Gambit" tournaments in which all games were required to begin with the moves of the gambit."

"His philanthropy was not just limited to self-promotion via the Rice Gambit, but extended to other chess activities. For instance he was the principle [sic] backer of the 1904 Cambridge Springs tournament. And, his giving extended to non-chess causes, such as funding John Holland's work on submarines. In 1916, shortly after Rice's death, a book honoring the opening, "Twenty Years of the Rice Gambit" was published by some of his devotees." 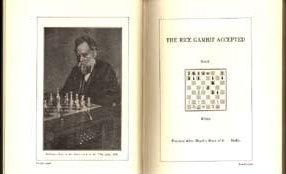 It is interesting to note that this book can still be found in used bookstores, often priced in excess of $100! The Bibliofind website (now part of Amazon.com) is helpful in locating a copy of this book.

According to "The Golden Treasury of Chess", the following consultation game was played on April 12, 1904 during the trip across the ocean, enroute to Cambridge Springs (1904). According to Soltis in Chess Life, December 1994 (page 16), this game last three days (!) and was sponsored by Rice. (A New York Times article from April 1904 refers to this game lasting four days. White was the team of Lasker, Tchigorin, Marshall and Teichmann. Black was the team of Janowski, Marco, Schlechter and Lawrence.

The above game, along with a brief introduction, can be found in All About Chess by I.A. Horowitz (Collier paperback, 1971).
See discussion of this game on ChessGames.com (18...Rd5!! is recommended as the winning move for Black).

A Rice Gambit team tournament (consultation games) was held at Cambridge Springs on April 30, May 7 and May 14. The rules permitted the players to make reference to "published play" at any stage of the games. The composition of the teams was as follows:

Apparently not wanting to be left out, Janowsky joined Team 4 in Round 2. In Round 3, the players regrouped and played three games, with two players on each side. The moves of two of these games can be found at Bill Wall's site, mentioned above.

A Rice Gambit tournament was held in 1904 in Monte Carlo and Napier used the variation in a tournament in London in the same year. Marshall annotates two of the games from Monte Carlo in his book My Fifty Years of Chess: Marshall-Von Scheve and Mieses-Marshall. Marshall comments, "The tournament was somewhat out of the ordinary as well. Because of Professor Rice's interest in his brain child, he showered generous payments on the analysts, who turned up the most marvelous attacks which were then followed by the most ingenious defenses, which in turn led to even more marvelous attacks, and then... but you get the idea! This was all great fun, but playing the gambit in a tournament was quite a job: you had to remember so much that a game with this opening was like an examination on French verbs"!

According to the Chess Life article cited above, Marco and Janowsky played a thematic match on the return trip to Europe (sponsored by Rice). Games began with a different variation: 1.e4 e5 2.f4 Bc5 (King's Gambit Declined, [C30]). Soltis lightly annotates game four of this match. Janowsky won the match 4-2, with no draws.
Top of Page | Home